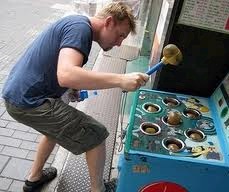 If you’ve spent any time in an arcade, bowling alley, or Dave and Buster’s, you’ve probably seen a Whack-a-Mole game.

The player uses a mallet to whack “moles” in the head as they pop up randomly from under the “ground” in front of them.  The moles appear and disappear randomly, sometimes popping-up all at once, one-at-a-time, two-at-a-time, etc.  The winner is the player who whacks the most moles in sixty seconds.

It’s a simple game, and can be lots of fun.  When multiple moles pop-up simultaneously, players have to decide which ones to whack before they all disappear.  There isn’t much time to formulate strategy, or anticipate where the next mole will appear.  It’s all about reaction time, and a bit of hand-eye coordination.

Whack-a-Mole is fun in an arcade.  Unfortunately, many people live their lives like a huge Whack-a-Mole game.  They’re always busy, whacking moles, and constantly on guard for the next one that pops-up.

There’s no time to think.  No time to strategize or find creative solutions.  No time to ask for help.  No time to address root causes…only time to react.  It’s not important that the same issues pop-up over and over.  It’s all about reaction time.

If you’ve allowed your days to become a large Whack-a-Mole game, do yourself a favor.  Put down the mallet.  Look up from the game.  Take time to think.  Take time to prioritize.

Chances are you’ll start to see beyond the urgent and put your focus where it matters most…on the important.